Home » GENERA C » Crassula » Crassula ciliata
Back to Category Overview
Total images in all categories: 11,793
Total number of hits on all images: 6,942,174 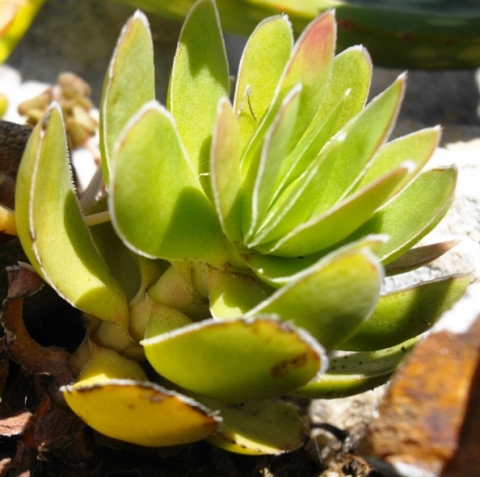 Crassula ciliata is a perennial leaf succulent, a small and low-growing plant with spreading branches and erect inflorescences up to 40 cm tall.

The obliquely angled leaves, crowded at the stem-tips, are probably the main attraction of this plant. They are pale green, obovate to elliptic in outline and convexly disc-shaped. The leaves are glabrous, that means hairless, apart from their notable marginal cilia. The specific name, ciliata, originates from this dense row of thin, white, hair-like protrusions like eyelashes.

The species distribution is in the Western Cape from the Cape Peninsula and Worcester to the Eastern Cape as far as Gqeberha.

The habitat is sandy and stony hillsides, in fynbos and scrub, also near the coast. The species is not considered to be threatened in its habitat early in the twenty first century, its population deemed to be stable.

The plant is easy to grow from cuttings or seed, making it an attractive addition to a rockery (Bond and Goldblatt, 1984; iSpot; www.redlist.sanbi.org).