Home » TYPES » Climbers » Thunbergia neglecta stem-tip
Back to Category Overview
Total images in all categories: 11,905
Total number of hits on all images: 7,156,016 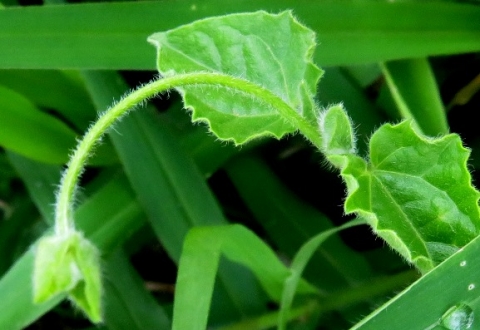 The new stem-tip of Thunbergia neglecta shows both the creeping, scrambling habit and the plant’s general hairiness.

The opposite leaves are glossy on their upper surfaces, their hairiness denser upon the pale lower surfaces and the margins. What may count as marginal teeth are nearer the base than the tip, more than the two of them common in descriptions. These leaves are quite variable and irregular in shape; the margins here wavy in the back parts.

Up to seven veins, varying in size radiate from the leaf base. A quilted appearance of the leaf blade is caused by its slight bulges among the secondary veining (Pooley, 1998; Van Wyk and Malan, 1997; iNaturalist).