Home » TYPES » Climbers » Xenostegia tridentata subsp. angustifolia
Back to Category Overview
Total images in all categories: 12,087
Total number of hits on all images: 7,392,967 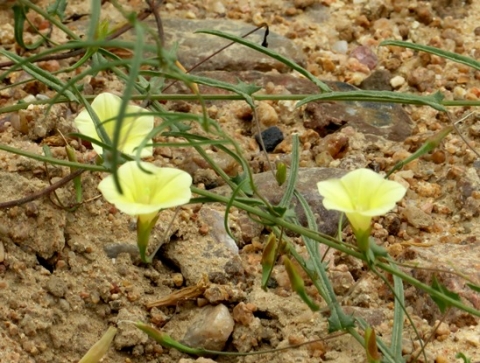 Xenostegia tridentata subsp. angustifolia, commonly the miniature morning glory and previously known as Merremia tridentata or Ipomoea angustifolia at different times, is a soft perennial or annual. It bears slender, prostrate or twining stems that reach lengths of 2 m. The stems are longitudinally ridged.

This subspecies is the only representative of its genus in South Africa. Its local distribution is the northeast of the country, the habitat grassland. The photo was taken in the Mjejane Game Reserve. The subspecies is not considered to be threatened in its habitat early in the twenty first century.

The plant is used in traditional medicine in KwaZulu-Natal in the treatment of stomach conditions (Pooley, 1998; iNaturalist; www.zambiaflora.com; http://redlist.sanbi.org).