Home » TYPES » Climbers » Thunbergia neglecta
Back to Category Overview
Total images in all categories: 12,081
Total number of hits on all images: 7,379,232 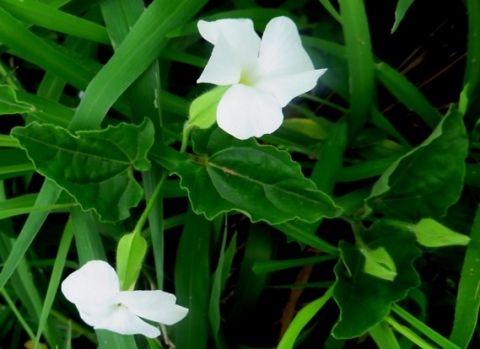 Thunbergia neglecta is a perennial that grows scrambling stems from a woody rootstock. Scrambling is a common feature among the thunbergias.

The flowers of T. neglecta grow on long stalks from upper leaf axils. The hairy green calyx bulges at the base, its two pointed tips pressed against the corolla tube. The creamy white corolla spreads its five broad, square-tipped lobes widely above the yellowish throat, about 4 cm in diameter. Flowering happens in summer.

The plant's distribution lies in the north-eastern provinces of South Africa north of the Vaal River, the Free State and KwaZulu-Natal, as well as in Swaziland, Zimbabwe and further in southern Africa.

The plant’s habitat is grassland, bush and woodland, sometimes thornveld and often preferring partial shade. The species is not considered to be threatened in its habitat early in the twenty first century.

This plant does not deserve to be overlooked by gardeners as the specific name neglecta might suggest (Pooley, 1998; Van Wyk and Malan, 1997; iNaturalist; http://redlist.sanbi.org).