Home » TYPES » Climbers » Trigonocapnos lichtensteinii
Back to Category Overview
Total images in all categories: 11,506
Total number of hits on all images: 6,494,342 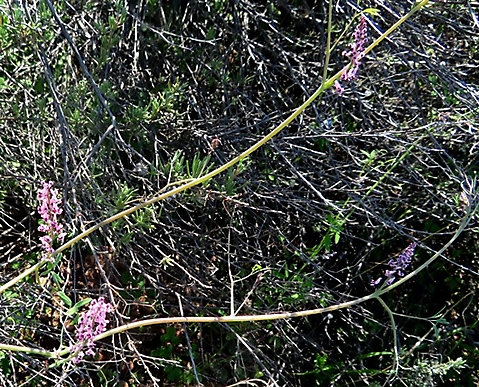 Trigonocapnos lichtensteinii, commonly known in Afrikaans as hekeltjies (little bits of crocheted lace) and previously scientifically as T. curvipes, is a soft-stemmed twining, climbing or trailing annual. Damaged plant parts ooze a reddish sap. The plant is hairless or very close to that.

The species is monotypic, the only of its genus in the Fumariaceae or bleeding heart family.

The species distribution is in the northwest of the Western Cape and the southwest of the Northern Cape, a South African endemic. The plants are found in the Bokkeveld from Nieuwoudtville southwards to Clanwilliam and eastwards into the western Karoo to near Sutherland. The photo was taken in the Biedouw Valley.

The habitat is sandy slopes among scrub. The species is not considered to be threatened in its habitat early in the twenty first century (Manning and Goldblatt, 1997; Bond and Goldblatt, 1984; iNaturalist; http://redlist.sanbi.org).