Home » TYPES » Climbers » Thunbergia pondoensis
Back to Category Overview
Total images in all categories: 12,081
Total number of hits on all images: 7,379,248 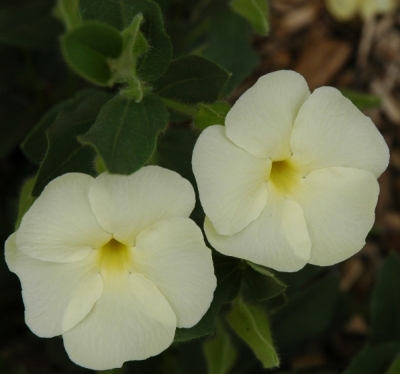 The white thunbergia as Thunbergia pondoensis is commonly known, is a hairy creeper reaching heights to 2 m. It has stalked, arrow-shaped leaves with pointed lower angles. The white flowers appearing in summer and autumn are trumpet-shaped with yellow throats.

The plants are found in in woodlands in eastern Mpumalanga and KwaZulu-Natal. The species is not considered to be threatened in its habitat early in the twenty first century (Manning, 2009; http://redlist.sanbi.org).