Home » TYPES » Climbers » Jasminum multipartitum
Back to Category Overview
Total images in all categories: 11,413
Total number of hits on all images: 6,190,414 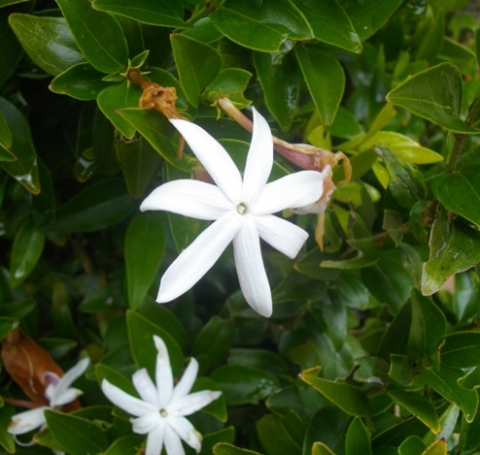 Starry wild jasmine, the common name of Jasminum multipartitum, suggests correctly that this is a desirable garden plant. The somewhat scrambling habit, dark green foliage, waxy white petals and pink or maroon outer surfaces of the flower tubes all add to the appeal.

The aromatic aspect of the flowers is enhanced in the evening. Pollination is conducted by insects including hawk moths. The spring and summer flowers are followed by shiny, juicy and edible berries that are initially green, later bluish black.

The species is distributed in the Eastern Cape, KwaZulu-Natal and inland to Mpumalanga, Gauteng and Limpopo.

The habitat is wooded areas and bush-covered slopes. The plant grows in sun or semi-shade, is somewhat drought resistant and mild cold tolerant. The species is not considered to be threatened in its habitat early in the twenty first century (www.plantzafrica.com; www.kumbulanursery.co.za; http://redlist.sanbi.org).