Home » TYPES » Climbers » Gloriosa superba
Back to Category Overview
Total images in all categories: 11,905
Total number of hits on all images: 7,155,899 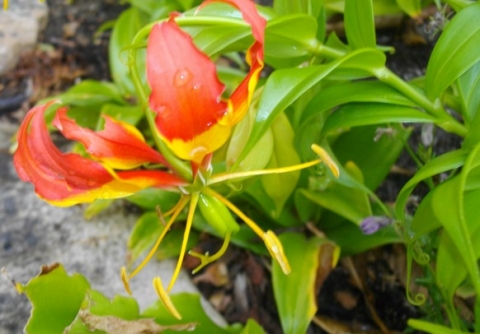 Gloriosa superba, commonly known as the flame lily, is a cormous climbing plant, well known for its very attractive flowers. Climbing is facilitated by tendrils that grow from the leaf-tips.

In South Africa G. superba grows along the coast in the Eastern Cape and KwaZulu-Natal. It is also found in the Mpumalanga and Limpopo Lowveld and some neighbouring countries, including Zimbabwe, Swaziland, Mozambique, Botswana and Namibia.

The plant tends to ramble among other plants in semi-shade of scrub and in coastal bush. It is dormant in the dry winters of its summer rainfall habitat. The species is not considered to be threatened in its habitat early in the twenty first century.

G. superba is the national flower of Zimbabwe where it is protected. It is also recognized as a symbol in certain parts of India. The plant has a variety of traditional medicinal uses. It is grown commercially as a garden subject and for certain chemical substances. The seeds are sometimes used as beads.