Home » TYPES » Climbers » Galium tomentosum
Back to Category Overview
Total images in all categories: 11,923
Total number of hits on all images: 7,173,533 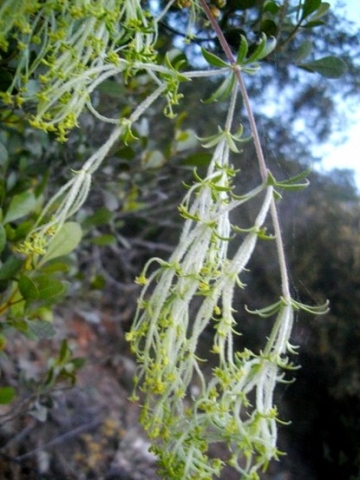 The flowers of Galium tomentosum are small, growing in branched clusters or panicles. The flowers have four tiny pale yellow or greenish petals. The pedicels of the flowers are long, especially on the female flower. Flowering happens in spring. The plant is dioecious, male and female plants being separate.

The rounded fruits of G. tomentosum containing big seeds are pale initially, turning black as they ripen. These fruits are said to have formed part of traditional medicine, used in the treatment of backache (Vlok and Schutte-Vlok, 2010; Bond and Goldblatt, 1984; Shearing and Van Heerden, 2008).