Home » TYPES » Climbers » Gloriosa superba curled leaf-tips
Back to Category Overview
Total images in all categories: 11,506
Total number of hits on all images: 6,494,343 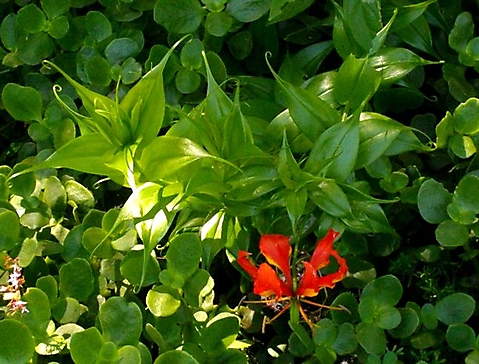 These Gloriosa superba leaves seen in the Walter Sisulu National Botanical Garden during January are broad and oblong from the base for a short distance. After that they taper rapidly and once narrow, attenuate into unusually long, curled-down tips; in this species useful leaf-tip tendrils.

But the plant in picture has nothing for its tendrils to clutch to, the Crassula around it too short for giving support. These tendrils will not hesitate to latch onto any opportunities, even other parts of the plant itself. This serves the lengthening stems in presenting their leaves best to sunlight and the good life it brings to photosynthesisers. (One might imagine some people habits also constituting a form of photosynthesis, although they usually lack the appropriate colour for it.)

The alternative to climbing for a fully grown G. superba plant is sprawling in a convoluted mass, which will happen if the unsupported stems become too heavy. Plants use their opportunities to the full, i.e. the real ones that come their way. They have no business with imagined chances, with longing or wishful thinking that sometimes make people unhappy.

The glossy leaf blades spread laterally, while the midribs are sunken in a central fold. New stems and leaves grow annually from the subterranean perennial resource, the corm (Manning, 2009; http://pza.sanbi.org).