Home » TYPES » Climbers » Fockea edulis leaves
Back to Category Overview
Total images in all categories: 10,504
Total number of hits on all images: 5,163,268 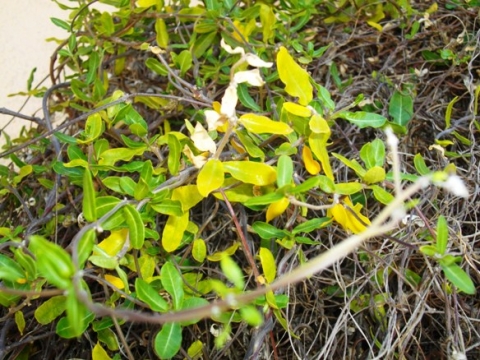 Fockea edulis, in Afrikaans commonly known as the bergkambro (mountain kambro), is a semi-deciduous, caudex-forming succulent with many rambling, vine-like, leafy stems. These vines may reach a height of 4 m if supported by surrounding structures, often trees. Otherwise they will form a leafy mass on the ground or on the caudex. The plant belongs to the Apocynaceae family.

The small (1 cm in diameter), scented, green and white flowers attract insects, especially bees. The plant has even been referred to as a bee magnet. The blooming season is late summer. The plants are dioecious. So one has to plant at least two to get viable seeds.

Water is stored in the huge caudex for the not so rainy day! The caudex may reach a size of 60 cm in diameter.

It is one of the Karoo and Namaqualand plants bearing the common name of kambro. It grows in nature in the drier regions of the Western and Eastern Cape, as well as KwaZulu-Natal. The species is not considered to be threatened in its habitat early in the twenty first century (Van Jaarsveld, et al, 2006; http://redlist.sanbi.org).