Home » TYPES » Climbers » Convolvulus farinosus
Back to Category Overview
Total images in all categories: 11,756
Total number of hits on all images: 6,906,003 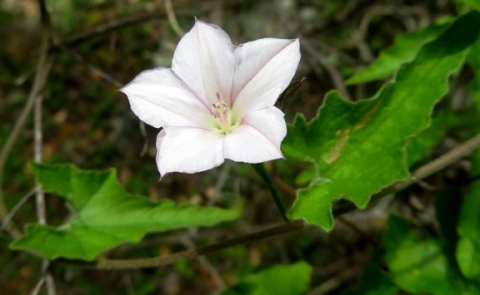 Convolvulus farinosus, commonly known as wild bindweed and in Afrikaans as klimop (climb up), is a straggling or twining perennial growing numerous long, slender stems from a perennial rootstock. It forms a mass of convoluted stems on the ground or may climb into available supports, sometimes smothering small neighbouring plants. The plant is hairy.

Parts of it are used in traditional medicine as a purgative and emetic in adults.

The species distribution is widespread in the south and east of South Africa and beyond the border as far as the Mediterranean and some Indian Ocean islands. The photo was taken in Kirstenbosch during November.

The habitat is moist coastal and inland areas, particularly woodland and grassland scrub. The species is not considered to be threatened in its habitat early in the twenty first century (Pooley, 1998; Moriarty, 1997; Leistner, (Ed.), 2000; iNaturalist; http://tropical.theferns.info; http://redlist.sanbi.org).