Home » TYPES » Climbers » Cynanchum africanum
Back to Category Overview
Total images in all categories: 11,528
Total number of hits on all images: 6,614,403 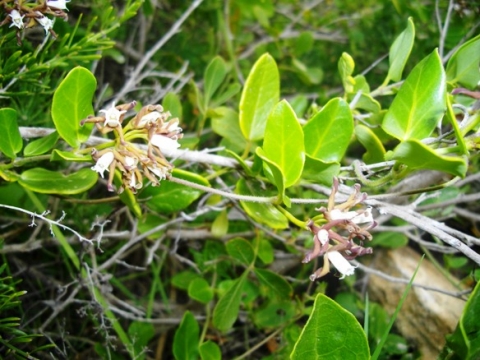 Cynanchum africanum is sometimes in Afrikaans called bobbejaantou (baboon rope). The plant normally grows rambling stems of only about 60 cm in length, spreading horizontally over available supports. No self-respecting baboon in his or her right mind would ever go climbing, using these flimsy stems to get anywhere!

Cynanchum is a widespread genus of about 100 mainly coastal climber species found in many parts of the world. The fynbos area has six of them.

C. africanum grows in sandy soil along the South African coast from Namaqualand to the Eastern Cape. This one was found flowering in September in the De Hoop Nature Reserve (Manning, 2007; iSpot).