Home » GENERA A » Aloe » Aloe peglerae flowers opening
Back to Category Overview
Total images in all categories: 12,081
Total number of hits on all images: 7,379,197 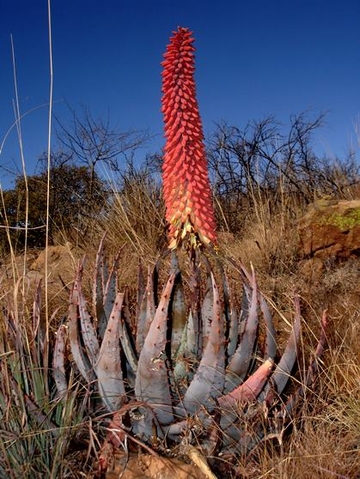 A slightly longer inflorescence this time, Aloe peglerae rosettes often don’t produce second or third racemes in a season. The thickness of the mostly cylindrical floral structure brought about by longer or shorter perianths is also variable.

The raceme in picture tapers to its top as well as deviates from the mostly straight cylinder shape (or narrow conic section). A few of the upper perianths still point angling up here. They soon sag as they lengthen but stay red until their tips open for the stamens and style to push out (Van Wyk and Smith, 2003; Jeppe, 1969; Reynolds, 1974; iNaturalist).