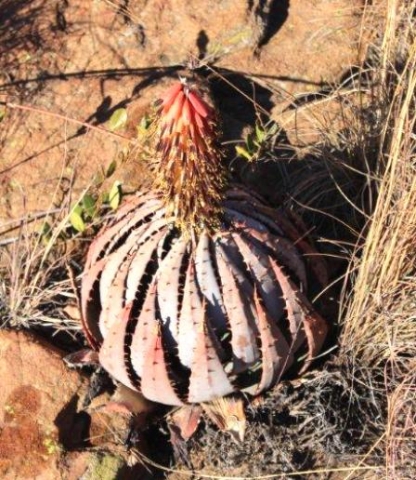 Aloe peglerae is a stemless Aloe or very nearly so. It normally produces only one leaf rosette per plant. The rosette comprises about 30 leaves that curve inwards to form a compactly rounded shape.

The leaves are triangular, tapering to their tips, about 8 cm wide at the base and 25 cm long. Leaf margins are armed with sharp, triangular spines, regularly spaced and progressively smaller to the base. The leaf keel also has a row of spines, growing along the upper third of the outer surface; about 6 or fewer in number. There are sometimes two rows of these spines on the outer leaf surfaces, although the specimen in picture seems to have only one row on most, possibly all of the visible leaves.

The plants grow in rocky places, mostly in grassland, at elevations from 1400 m to 1700 m. Its reddish leaf colour reflects the dry, wintry conditions that bring stress to the plant at this time of year, working hard on its flowering and fruiting assignments. The species is critically endangered by continuing illegal plant removal by collectors (Reynolds, 1974; Van Wyk and Smith, 2003; http://redlist.sanbi.org).