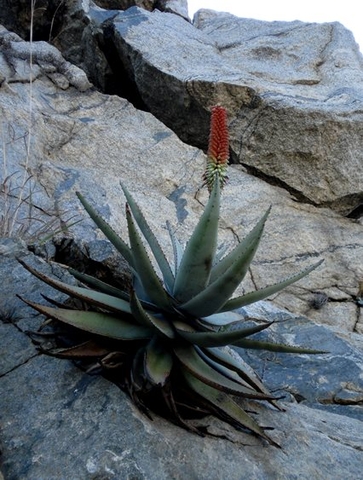 Aloe petricola, sometimes called the rock aloe, usually grows a dense, single rosette of slightly incurved leaves at ground level. The plants are usually stemless, although some old ones do develop short stems. In nature the plants are often solitary, sometimes in groups of variable size. These medium-sized aloes are about 1,3 m tall when in flower.

From 20 to 30 thickly succulent, grey-green to blue-green leaves are produced per rosette. The leaves become about 60 cm long and 10 cm wide (at the base). A few scattered prickles are usually present on the upper surface of a leaf, also some on the lower one but those are usually confined to the upper part of the leaf keel. The marginal teeth are 5 mm long and 15 mm apart. The leaf sap is honey coloured.

The species distribution of this South African endemic is restricted to a north-easterly part of Mpumalanga, from the south of the Kruger National Park to Schoemanskloof in the west and Barberton in the south.

The habitat is granitic slopes and outcrops as well as some small sandstone places where the plants mostly grow in sour bushveld. The species is not considered threatened in its habitat early in the twenty first century, in spite of severe human impact on its terrain.

The specific name, petricola, is derived from Greek, meaning resident of rocky places.