Aloe perfoliata on a rock with a view 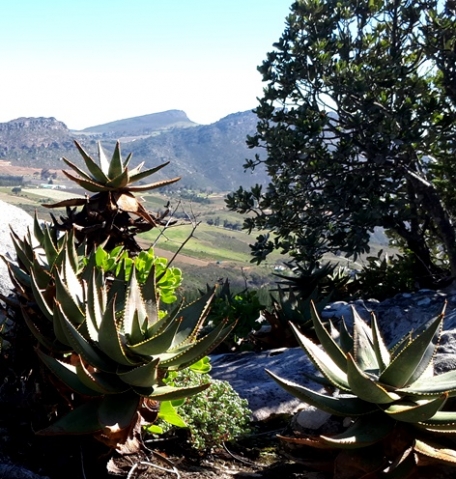 These Aloe perfoliata sentinels symbolically guard the town of Piketberg and surrounds, earlier Piquetberg, from their Piketberg Mountain perches near the town.

Growing in soil derived from Table Mountain Sandstone, or the more up to date term, Peninsula Formation Sandstone, the scarlet or orange-red flowers appear in summer. In August, the photo can only feature the yellowish, cartilaginous teeth on the leaf margins. The thickly succulent, triangular leaves angle up and outwards in rigid rosettes.

Both A. distans and A. mitriformis are now sunk into the later described A. perfoliata, ignoring superficial differences (Frandsen, 2017; Jeppe, 1969; iNaturalist; Wikipedia).