Home » GENERA A » Aloe » Aloe khamiesensis leaf spots
Back to Category Overview
Total images in all categories: 11,506
Total number of hits on all images: 6,493,830 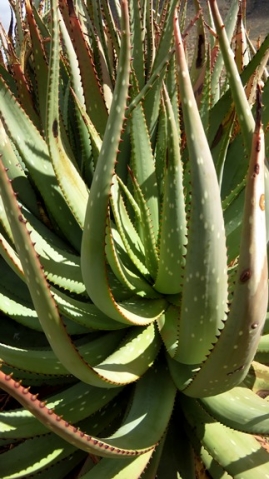 The narrow leaves of Aloe khamiesensis curve up near the base. The upper parts may curve outwards or remain erect. The leaves become 40 cm long and 8 cm wide.

The red-brown, triangular teeth are only present upon the margins, both blade surfaces being smooth. Small, elliptic, white spots are usually scattered upon both leaf surfaces, more prevalent on the lower surface. The leaf colour is generally pale dull-green.