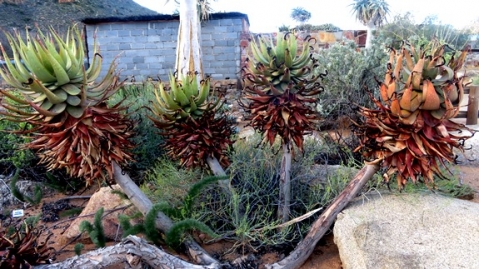 Aloe khamiesensis is a single-stemmed or two-branched succulent tree of up to 3 m in height (SA Tree List No.29.3). Dead leaves tend to persist below the live leaf rosette; only the lowest stem part sheds them. Some say that the bare bottom stem parts are caused by animals rubbing the dead leaves off, suggesting that they would persist to ground level where no interference had taken place. (The phenomenon of dead plant parts persisting on the live plant is known as marcescence.) The photo was taken in the Goegap Nature Reserve.

The distribution of A. khamiesensis, if taken as a separate species, is in the Northern Cape, particularly in the dry, hot, mountainous parts of Namaqualand and near Calvinia. The plants occur at elevations between 500 m and 1400 m. The species is not considered to be threatened in its habitat early in the twenty first century, apart from disappearing into another name with no harm to the plant (Van Wyk and Smith, 2003; Frandsen, 2017; Le Roux, et al, 2005; Coates Palgrave, 2002; Reynolds, 1974; Jeppe, 1969; iNaturalist; http://redlist.sanbi.org).