Home » GENERA A » Aloe » Aloe knersvlakensis
Back to Category Overview
Total images in all categories: 11,793
Total number of hits on all images: 6,941,769 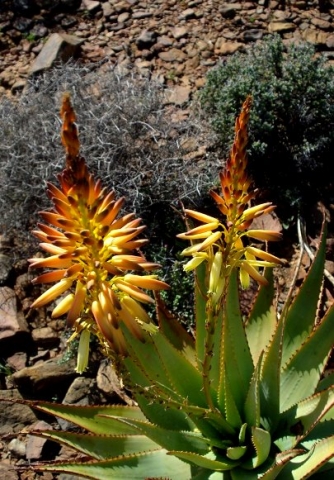 Aloe knersvlakensis is a stemmed and branching species newly named and described around 2010.

It resembles several Aloe species of the west of South Africa, viz. A. microstigma (but the inflorescence tends more to yellow particularly in its upper or bud parts as in picture), A. gariepensis (but the racemes are shorter and branched), A. framesii (but the flowers not as red, the leaves less spotted and the stems taller) and A. khamiesensis (but the flowers are not as red and there may be less green on the perianth tips).

The species distribution in the north of the Western Cape is small, restricted to the northeast of the Knersvlakte near Vanrhynsdorp and Nuwerus.

The habitat is north-facing quartzitic ridges in succulent Karoo where the plants grow in shale vygieveld. The population is considered to be stable early in the twenty first century, although the plant population is small, the species rare (www.cabdirect.org; http://redlist.sanbi.org).