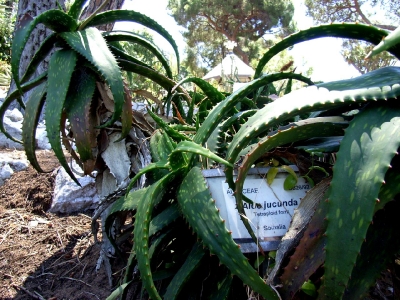 Aloe jucunda is indigenous to an area close to Hargeisa, a town in Somalia, adjoining savannah grassland. The plant typically occurs in woodland that is also prevalent in the region. It grows well in moderate temperatures and partial sunlight.

The low-growing A. jucunda forms one or more basal rosettes, clumping through suckering. The flowers are pale rose to coral pink.

This is one of Africa's numerous maculate or spotted leaf aloes and one of Somalia's 27 indigenous aloe species. It is noted as endangered early in the twenty first century.

The photo was taken in the Gibraltar Botanical Garden (Endangered Wildlife and Plants of the World. Marshall Cavendish Corporation).