Home » GENERA A » Aloe » Aloe greatheadii var. davyana leaf rosette
Back to Category Overview
Total images in all categories: 11,756
Total number of hits on all images: 6,905,747 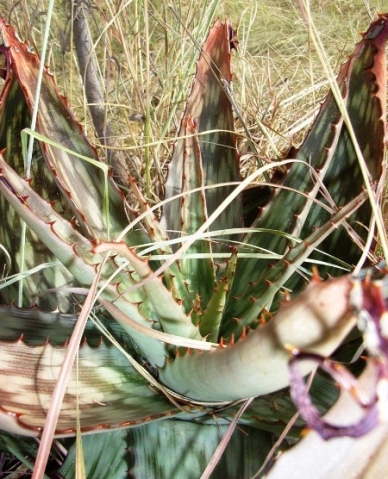 The tidy leaf rosette of Aloe greatheadii var. davyana comprises about twelve to twenty spreading, lance-shaped to triangular leaves on the ground, the plant being stemless. The lower leaf part is broad and thickly fleshy, about 10 cm long; the upper part tapers into a narrowing section, soon to dry and twist; nearly as long as the fleshy part after some dry seasons.

The upper surface of the leaf is slightly concave to nearly flat, the lower one convex. The green upper surface has numerous oblong whitish spots, often arranged in irregular transversal bands while thin longitudinal lines are also present. The lower surface is pale green, sometimes finely longitudinally lined and spotless. Spiny teeth occur only along the leaf margins where a hard, brown ridge curves down between the regularly spaced, brown teeth.

The sturdy stem base of an inflorescence is visible in the photo, emerging from among the older leaves. Up to three inflorescences may be produced from one rosette per season (Reynolds, 1974; Van Wyk and Smith, 2003).