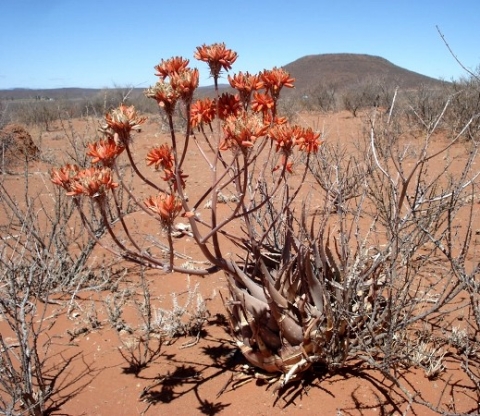 Aloe hereroensis, in Afrikaans commonly the vlakte-aalwyn (plains aloe) or sandaalwyn (sand aloe), usually grows a single rosette, but may branch into clumps of up to three similar ones.

The lower leaf surface is characteristically spotted, especially in young plants, whilst the upper surface is clear of such spots but lined, distinguishing the species from the maculate aloes.

The inflorescence is usually repeatedly branched, resulting in an elaborate panicle of sometimes more than 20 short, capitate racemes presented in a shallow dome-shape. Flower colour may be red or scarlet, yellow or orange.

The species distribution is in the inland east of the Northern Cape and slightly into the western Free State, as well as in Namibia and Angola.

The habitat is dry, rocky and sandy places, much of it Nama Karoo. The species is not considered to be threatened in its habitat early in the twenty first century (Reynolds, 1974; Van Wyk and Smith, 2003; www.redlist.sanbi.org).