Home » GENERA A » Aloe » Aloe greatheadii var. davyana flower
Back to Category Overview
Total images in all categories: 11,506
Total number of hits on all images: 6,514,537 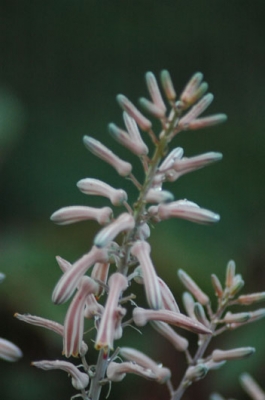 Aloe greatheadii var. davyana, previously A. davyana, is common in Gauteng. It is noticed mostly during the winter months when thousands of flowers appear in the grass. They are often found in large groups in poorly managed veld.

The other variety of this Aloe, i.e. A. greatheadii var. greatheadii grows in the north of Limpopo, Zimbabwe (where it abounds), Botswana to Malawi and the DRC. Var. davyana is found more to the south, in the Free State and all provinces north of the Vaal River.

Baboons will feed on the leaves, destroying plants, but not the plant populations that are replenished from numerous seedlings in the highveld grass. Pollination is done by bees, other insects and birds. Seed is dispersed by wind.

The leaf sap of this plant is used to treat burns and wounds (Van Wyk and Smith, 2003; www.plantzafrica.com).