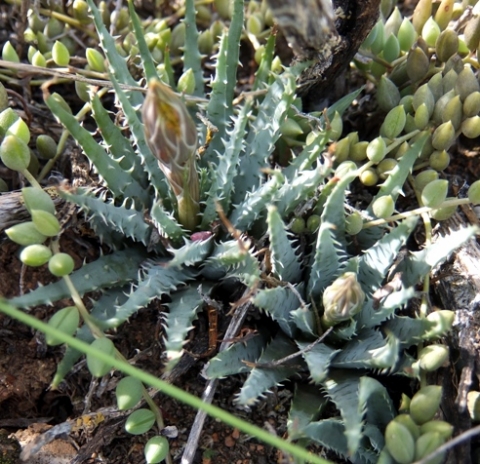 The narrow, lanceolate leaves taper to acute tips; they are erect or curve in. Their inner surfaces are about flat, the outer ones convex, both covered by a waxy bloom. A scattering of soft white prickles and tubercles, varying in density is found upon both surfaces and the margins. In shade the leaves are greener and spread somewhat, in full sun they tend to be blue-grey and converging. The leaf sap is almost clear, pale yellow. Leaf dimensions are 10 cm by 1,5 cm.

The species distribution ranges from Mossel Bay to Port Elizabeth and inland to Graaff-Reinet and Grahamstown. The plants grow from sea level to elevations around 1500 m. The habitat is stony flats and lower slopes in arid karoid scrub. Medium rainfall is received in winter in the western parts of this distribution area, during summer in the eastern part. The summers are hot here, the winters cold, especially inland around Graaff-Reinet.The species is not considered threatened in its habitat early in the twenty first century.

Five varieties of A. humilis have been described. The species hybridises in nature with A. lineata, A. microstigma and A. striata (Jeppe, 1969; Van Wyk and Smith, 2003; Reynolds, 1974; www.redlist.sanbi.org).