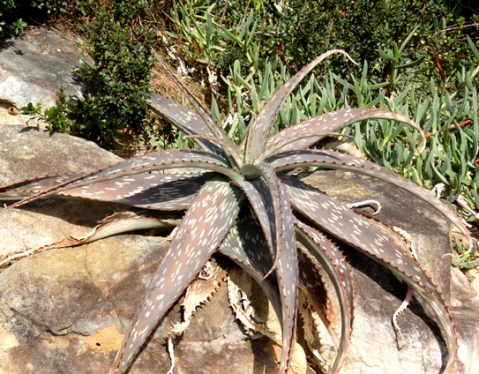 Aloe greenii, one of the many spotted aloes of South Africa, is mostly stemless and forms clumps from spreading suckers. Usually bright green, the leaves of this plant have gone purple, finding its rock garden conditions a tad challenging at the end of a hot dry season, probably having had more sun than it relishes.

The species distribution is in north-eastern KwaZulu-Natal and southern Mozambique at medium to low altitudes in warm, high rainfall and frost-free conditions. It is often found on flats among trees and shrubs, thriving in shade over well-drained sandy soil. The species is not considered threatened in its habitat early in the twenty first century (Van Wyk and Smith, 2003; Reynolds, 1974; Jeppe, 1969; www.redlist.sanbi.org).