Home » PARKS AND GARDENS » Kruger National Park » Bushveld stroll
Back to Category Overview
Total images in all categories: 12,086
Total number of hits on all images: 7,387,136 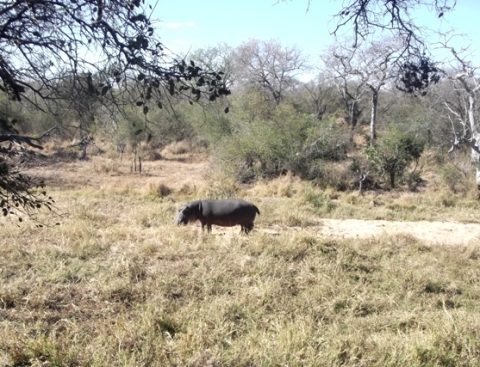 Previous
Image 8 of 53
Next

Yes, hippopotami are sometimes found a (little) distance away from water, but that usually happens at night. They graze after dark for a few hours, covering a couple of kilometres.

Only the elephant and the white rhino are bigger land animals than the hippo, of all that currently lives on earth. A hippo hide alone may weigh half a ton.

Once revered as holy beings in Egypt, hippos have been exterminated there. Their feeding on agricultural crops around the Nile had to be stopped. Don't interfere with people's food or work!

Some parts of Africa have game reserves where hippos can still live fairly safely. All that is needed is a nice big pool in a permanent river not polluted by some human activity and some grassy banks around for grazing.

Unlike the hapless rhino and elephant no big trade in hippo body parts decimates their numbers… yet. But the hippo does not appreciate this privilege and does not respond to taming, as the horse did 4000 years ago.

The hippo is still the animal killing most people in Africa. So, don’t go close to stroke its head (www.outtoafrica.nl).