Home » PARKS AND GARDENS » Kruger National Park » Brownhooded kingfisher
Back to Category Overview
Total images in all categories: 12,086
Total number of hits on all images: 7,387,238 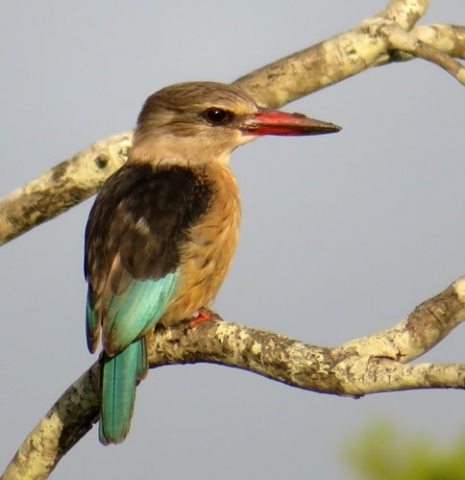 Previous
Image 6 of 53
Next

The brownhooded kingfisher, scientifically known as Halcyon albiventris, is a tree kingfisher found in the Kruger National Park, as well as widely in the east of southern Africa and northwards across Sub-Saharan Africa.

The upper back of the bird is black or brown, darker than the hood. The lower back and tail are bluish turquoise. Below and in front it may vary between white, buff and ochre.

The brownhooded kingfisher moves about in pairs or solitary, breeds in spring and early summer and lives among trees and shrubs of woodland, scrub or forest margins; foraging on the ground.

Its nest is in a tunnel of up to 1 m long in earthen banks of rivers or gulleys, at least a metre above ground level. Four or five white eggs hatch in two weeks, the young fed mainly insects by both parents.

The species has been assessed as of least concern by the IUCN early in the twenty first century (Maclean, 1993; Wikipedia).