Home » PARKS AND GARDENS » Kruger National Park » Ficus sycomorus in riverine bush
Back to Category Overview
Total images in all categories: 12,086
Total number of hits on all images: 7,387,094 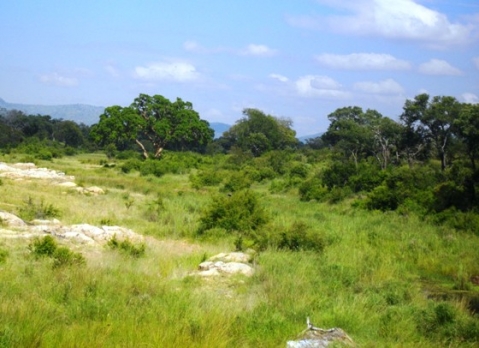 Ficus sycomorus, the common cluster fig, in Afrikaans the geelriviervy (yellow river fig), is the big one with angled pale stems almost inside the riverbed.

Because the visitor cannot go closer for a proper identification in the Kruger National Park, there may be some doubt. The most likely other candidate by looks, F. vallis-choudae, only grows beyond the South African borders in Zimbabwe and further north. The only other possibility with such height and stems in the riparian habitat of this region is F. sur, of which a more erect shape might be expected.

The more the confirmatory clues, the bigger the probability of a correct identification, but by sight alone certainty does not always reach 100%. Although most people will not actually speak to the plants they meet, the same as with the people they encounter, they still prefer to know the names… if they are at all socially adjusted in the bush.

The name sycamore tree is in England and America given to trees quite different to the F. sycomorus of Africa. The sycamores of the Middle East are the same as this African fig, but have probably been introduced from cuttings or as seedlings, cultivated for their fruit.

The F. sycomorus pollination wasps do not occur in the Middle East, ruling out natural propagation there. The absence of these wasps means that no holes are made at the tips of the figs.

As a consequence they do not ripen naturally. This at least prevents insect infestation and may help the traders in the mostly dried fruit business. When dried, the figs are said to taste like sultanas (Coates Palgrave, 2002; Van Wyk and Van Wyk, 1997; Schmidt, et al, 2002).