Home » PARKS AND GARDENS » Kruger National Park » Crowned hornbill
Back to Category Overview
Total images in all categories: 12,086
Total number of hits on all images: 7,387,224 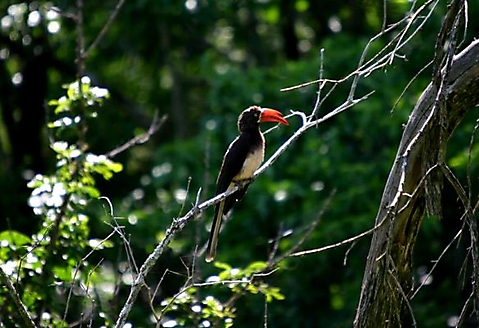 The crowned hornbill, scientifically Tockus alboterminatus, has a casqued bill when mature, the male's one larger. This is the only red-billed hornbill that has a casque or helmet-like structure on top of its bill.

The birds are mainly sooty black, their bellies white and the sexes similar. Tailfeathers are white below in picture; usually it is only their tips that are white.

The crowned hornbill is in South Africa only found in the eastern extremes of the country, along the Eastern Cape and KwaZulu-Natal coasts and near the border in the Mpumalanga and Limpopo Lowveld.

The birds usually live in groups of two to five, mostly in thorny thickets of woodland, savanna and forest margins, roosting as a group on slender branches in the open.

They perform a dip in flight after every few wingbeats of their slow inflight progress, twisting or tumbling near arrival. Still, they often catch insects in flight and nibble them a bit in their bill-tips before swallowing. Small rodents or reptiles are also eaten, while seeds and fruits balance the diet. Movement on the ground is by hopping.

Two to five white eggs are laid in a hole in a tree trunk or rockface, hatching after about four weeks. The nest opening is plastered shut apart from a small slit during the incubation and again when the female is out, feeding the chicks. The young remain with the parents for up to eight months (Maclean, 1993; Wikipedia).