Home » GENERA P » Protea » Protea scolymocephala
Back to Category Overview
Total images in all categories: 11,241
Total number of hits on all images: 5,956,182 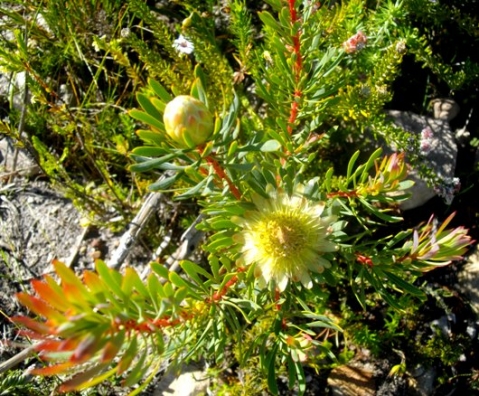 Protea scolymocephala is an erect shrub that branches above-ground to form a rounded shape between 50 cm and 1,5 m in height. The pale brown stems are hairless.

The flowerheads are globose in bud. When they open the involucral bracts are splayed widely, only the tips of the inner row of bracts curving up slightly. The inner bract surfaces, visible around the shallowly cone-shaped cluster of perianths, are cream to pale green in colour with pink tinges towards their tips. Flowerheads measure about 4 cm in diameter.

Once the last individual flowers in the centre of the head have opened, pollen presenters at the ready above, the bracts close again for a period until the seeds have ripened. These dark, closed flowerheads from the previous season can usually be seen on mature plants lower down among the branches.

The bracts will open later for a second and last time when the seeds are released. Flowering begins in midwinter and carries on until the end of spring, but peaks around the beginning of spring.

The distribution of the species lies from about Clanwilliam southwards to the Cape Peninsula and eastwards to around the Bot River Lagoon.

The habitat is mainly sandy flats among fynbos at low elevations. The species is considered to be vulnerable in its habitat early in the twenty first century due to urban expansion, farming, alien plant invasion, too frequent fire, groundwater extraction and increased mole rat activity (Rourke, 1980; http://redlist.sanbi.org).