Home » GENERA P » Protea » Protea scabra faded flowerhead in January
Back to Category Overview
Total images in all categories: 11,241
Total number of hits on all images: 5,956,201 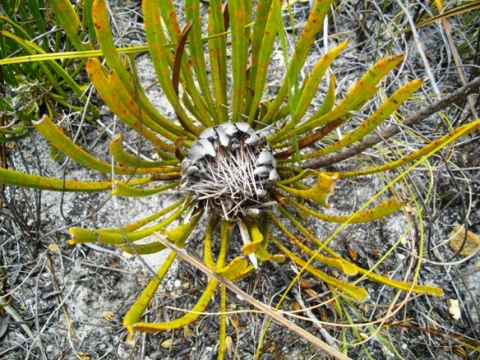 The rhizomatous proteas, those with underground stems, have quality fire protection. They resprout from the underground parts when the coast is clear after the fire, carrying on growing with more certainty and resources than those relatives with less insurance cover.

Some of the rhizomatous species produce little more than a tuft of leaves with a flower above ground level, like Protea scabra. Other such species may have surface stems creeping along the ground. Yet others develop strong, erect stems like P. cynaroides, doubly insured via strong sunken resources as well and truly counting among the affluent members of the Protea family, if human terms may be used.

Inequality is as prevalent among plants as among people, but without constitutional measures for \"correcting\" all that. Nature is too powerful for being warped by aberrations in systems such as democracy.

From behind the dead flowerheads, such as the one in picture, axillary buds from below the leaves will grow more underground stems in the new season. This will eventually result in more leaf tufts appearing above ground.

Seed dispersal is done by wind, after storage on the plant for a couple of years in the dry seedhead (Rourke, 1980; Manning, 2007; http://protea.worldonline.co.za).