Home » PARKS AND GARDENS » Karoo Desert NBG » Pelargonium carnosum
Back to Category Overview
Total images in all categories: 11,036
Total number of hits on all images: 5,685,783 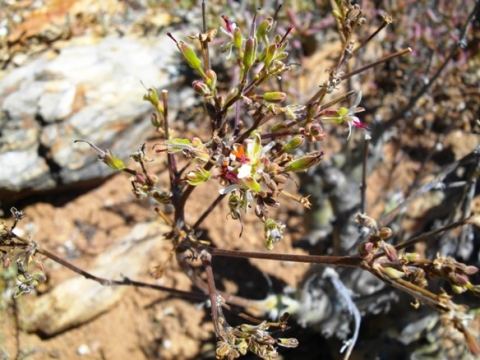 Pelargonium carnosum is a thick-stemmed, much branched, deciduous, succulent member of the genus. The leaves are sometimes so deeply lobed that they could almost be described as pinnately divided. They are grey-green, finely hairy, slightly succulent and channelled along the main axis.

The flowers are white or light pink. The greenish-yellow flowers sometimes shown may be from a hybrid. The upper petals often have two small pink lines at the base. The filaments are prominent and pink. The growing and flowering season appears to be whenever there has been rain, but mainly winter, stretching into autumn and spring.

This photograph was taken in midsummer in the Karoo Desert National Botanical Garden. But flowering and with leaves! So, expect some variations as to the plant’s seasonal habits. Maybe one should say it flowers at any time? Maybe it should be described as semi-deciduous.

The plant may exceed 1 m in height and will grow into a well-shaped, rounded bush if it has the space and growing conditions. Well-drained soil, plenty of compost and full sun, with moderate watering should result in a good plant.

This species is found in nature inland from Namibia to the Eastern Cape. This means the habitat of P. carnosum exceeds the winter rainfall area to a limited extent (www.backyardgardener.com; Vlok and Schutte-Vlok, 2010).