Home » PARKS AND GARDENS » Karoo Desert NBG » Aloe speciosa inflorescence
Back to Category Overview
Total images in all categories: 9,387
Total number of hits on all images: 4,216,917 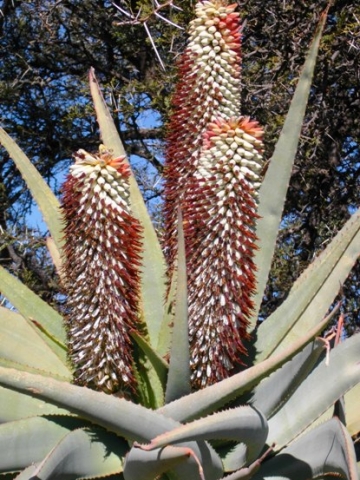 The flowers of Aloe speciosa shown here have nearly lost all their red colour on the perianth buds. This is because they were nearly all open at the time the photo was taken in mid-August. The plant grows in the Karoo Desert National Botanical Garden. Flowering in habitat normally occurs from July to September, the middle of the blooming season. Worcester is not too far west from Swellendam, the western extreme of the plant’s distribution area, to alter the growing conditions that much.

Several Aloe species have flowers that undergo colour changes when the buds open, often from red to yellow. In the case of A. speciosa the red is replaced by green with white stripes on fully opened perianths. The many red-brown or black exserted anthers on these racemes add their own dimension to the appearance. This feature is shared with many other Aloe species although in some cases the effect is not quite so striking.

In the picture three single racemes are displayed. A. speciosa racemes do not branch. There may be up to four on one rosette. The racemes are short (only about 50 cm) compared to e.g. A. ferox. The cylindrical shape seen here is sometimes more conical while the upper buds are not yet at full length. The stalk or peduncle of the raceme is about 20 cm long and usually hidden among the leaves. There are many brown sterile bracts spread across the surface of the peduncle (Reynolds, 1974; Van Wyk and Smith, 2003).