Home » PARKS AND GARDENS » Karoo Desert NBG » Zygophyllum foetidum flower
Back to Category Overview
Total images in all categories: 11,036
Total number of hits on all images: 5,685,779 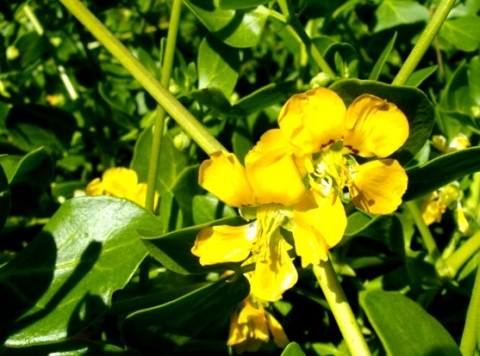 The flowers of Zygophyllum foetidum are yellow with small red markings at the base of the petals or some of them. Blooming happens from midwinter through summer. The spherical fresh fruits dry out to display five hard lobe ridges.

The paired leaflets grow on 2 cm stalks. They are fresh green and succulent. The leaves have an unpleasant odour, intensified when crushed. The much branched soft stems are square in section.

It is possible that the form of this plant found on the Bokkeveld Plateau near Nieuwoudtville with paler yellow or watery yellow flowers that have red markings only on the upper petals, is a different form to the bright yellow flowering one depicted here. This picture was taken in the Karoo Desert National Botanical Garden at Worcester.

This plant is not palatable to game and livestock as are several of the other South African Zygophyllum species. The genus was at times called Roepera, a name that is still occasionally seen (Manning, 2009; Vlok and Schutte-Vlok, 2010; Manning and Goldblatt, 1997; www.redlist.sanbi.org).