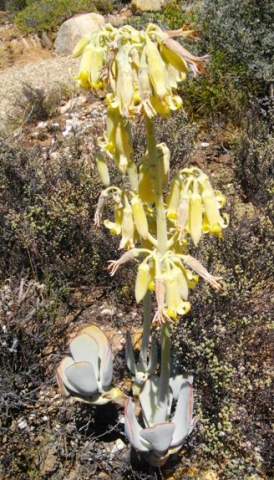 The smooth, succulent, grey leaves with their red margins are typical of the species. There are, however, remarkable variations in some of the forms of this species. This can be expected from a plant that has breasted such dissimilar natural challenges across most of South Africa and some of the neighbouring countries. Best solutions for survival in diverse conditions are likely to reflect those differences.

Maybe these forms will be separated into different species in the future. Speciation is a slower process than the rate at which people change their minds.

There is another yellow flowering Cotyledon, viz. C. cuneata, with shorter flower tubes that are not generally pendulous. It has wedge-shaped leaves and is commonly known as the sticky stem Cotyledon. It was recorded by Jardine and Jardine from the Swartruggens area in Veld and Flora of December 2010 (www.plantzafrica.com).