Home » HABITAT » Habitat diversity » Rhodocoma capensis
Back to Category Overview
Total images in all categories: 11,506
Total number of hits on all images: 6,493,818 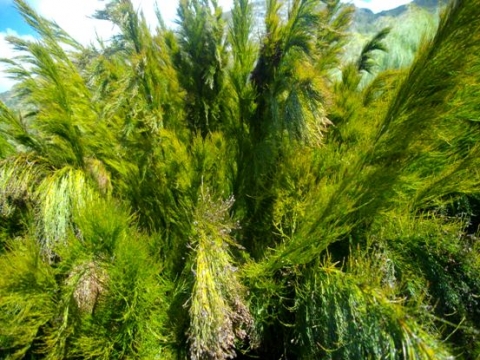 Rhodocoma capensis, commonly known in Afrikaans as litjieskanet (little joints cord leaf), is one of the larger Cape restio-like plants, but belongs to the much smaller Rhodocoma genus comprising only eight species, mainly occurring in the southern Cape.

The plant forms a tuft, tussock or clump of stems from the densely creeping roots, the patch covered becoming about 1 m in diameter. The erect, reed-like stems are reminiscent of Elegia capensis, sometimes likened to bamboo (or rather mini-bamboo).

The species distribution is in the Western Cape and Eastern Cape, from Ceres to Uniondale, more in the southern inland than towards the coast.

The habitat is sandstone and quartzite soil in damp lowlands near watercourses and seeps. It may be abundant in deep loamy soil. The species is not considered to be threatened in its habitat early in the twenty first century (Dorrat-Haaksma and Linder, 2012; Bond and Goldblatt, 1984; www.plantzafrica.com; http://redlist.sanbi.org).