Home » HABITAT » Habitat diversity » Rhodocoma gigantea
Back to Category Overview
Total images in all categories: 11,416
Total number of hits on all images: 6,192,800 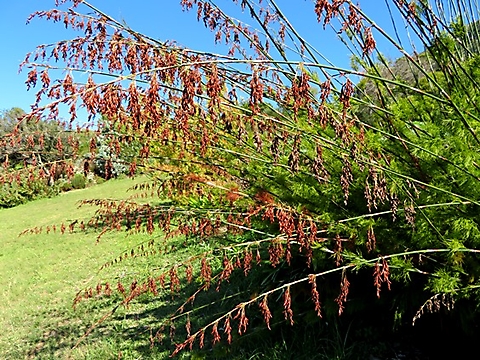 Rhodocoma gigantea, sometimes commonly called the tall elephantreed and previously scientifically Restio gigantea, is a large, tufted plant growing many long culms to heights from 2 m to 3 m. The tuft may be 50 cm in diameter.

The species distribution is coastal to near coastal in the east of the Western Cape from Riversdale to the west of the Eastern Cape around Humansdorp.

The habitat is moist, southern, fynbos slopes of the coastal mountain ranges, usually in deep, sour soils. The species is not considered to be threatened in its habitat early in the twenty first century (Bond and Goldblatt, 1984; iNaturalist; http://pza.sanbi.org; http://redlist.sanbi.org).