Home » HABITAT » Habitat diversity » San rock art in the Cederberg
Back to Category Overview
Total images in all categories: 12,081
Total number of hits on all images: 7,379,110

San rock art in the Cederberg 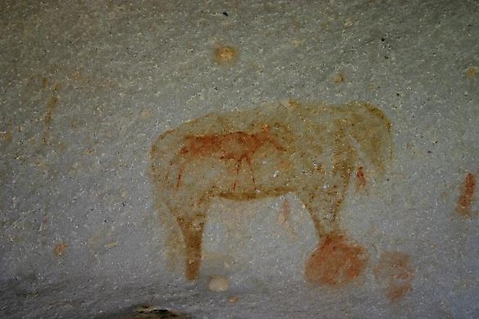 Among the wonders of the Southern African veld are the rare and precious rock paintings and carvings left by the San people or Bushmen in caves and on rockfaces of shelters very long ago. Together with the Khoi they were the earliest known tribes inhabiting the region.

The pictorial records fading slowly and sometimes deliberately defaced in modern times, give glimpses of a human lifestyle so much closer to nature than what people experience today or are capable of. San cultural and belief systems, click-sound language(s) and survival skillsets are only partly known to us. The past recedes behind the obstruction of the forever growing series of transformations brought to the social and physical worlds, by the influx of diverse peoples after the San.

Recently grown respect for and awe in the face of their achievements (and a sense of history) are contributing to conservation and related reconstructive efforts, built on fragmentary knowledge.

The extant offspring of the San have a hard time. They balance adaptation to current era requirements while holding on to roots dear to some of them. Like so many tribes and other homogeneous groups, today's San people occupy a both proud and tragic niche in the shared history of the region. It's a share in a precarious journey of a troubled, turbulent society torn by strong forces. As a tiny minority their share is small, its margins blurred by continual blending of the heterogeneous peoples living on the land.

Many words, images and artifacts relating to the San are preserved, slightly out of sight in the modern hustle and bustle of a society looking around nervously in all directions, even back. These images and vignettes of Bushman life exist in cultural records and reconstructive efforts. Small glimpses into San psyche and how they lived are close to or far removed from a truth never to be fully known.

The rock paintings are a true but limited element of the material used for reconstructing a bigger picture. When people refine their own narrative for defining identity, their meaning and worth, they inevitably endeavour to uncover the essence of their ancestors.

The words “We have a sensation in our feet as the Springbok come rustling the bushes” and “The Wind (i.e. the wind’s son) was formerly a man. He became a bird.” and more said then and heard now, stir the spirit in multiple meanings, old and new. It tells of a world that can be understood in so many ways, for long not pursued.

This peering into the psyche of yesterday's people for finding links to the paths travelled is typically done by observers including artists and scientists from all interested parties, directly involved to no link at all. A clear and cohesive outcome is made less likely by this and other factors. The future lies the other way.

The photo was taken of a rock painting in the Cederberg. Many such pictures exist. Much may still be revealed relating to this, or not (Antjie Krog quoting Bleek in The Humanist Imperative in South Africa, 2011, STIAS, SUN PRESS, Stellenbosch; Wikipedia).