Home » GENERA T-Z » Tylecodon » Tylecodon grandiflorus
Back to Category Overview
Total images in all categories: 11,241
Total number of hits on all images: 5,955,941 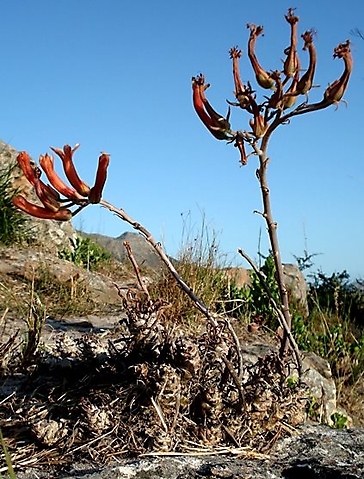 The summer deciduous leaves start growing in autumn only on new stem-tip parts.

The species is distributed in the west of the Western Cape from the Cape Peninsula coastally to the Sandveld, slightly into the Northern Cape.

The habitat is coastal sand and stony places among scrub, rock crevices and sometimes sheltered among rocks. The species is not considered to be threatened in its habitat early in the twenty first century (Smith, et al, 2017; Van Jaarsveld, et al, 2006; Manning and Goldblatt, 1996; iNaturalist; http://redlist.sanbi.org).