Home » GENERA T-Z » Tylecodon » Tylecodon leucothrix
Back to Category Overview
Total images in all categories: 11,632
Total number of hits on all images: 6,749,728 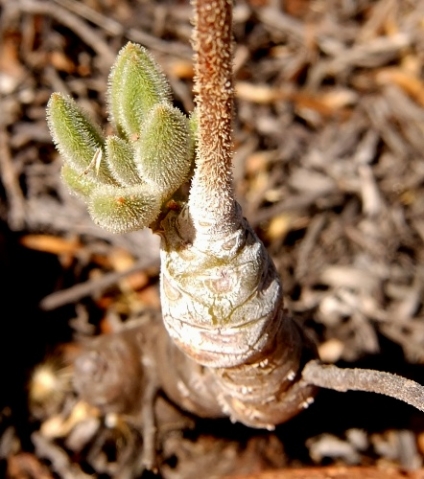 Tylecodon leucothrix, sometimes called bunny ears and in Afrikaans commonly known as doubossie (little dew bush), probably because of the way the dew collects on the leaf hairs, is a perennial succulent growing to heights from 5 cm to 30 cm.

It has a thick, often branched and variably bulging caudex that becomes up to 6 cm in diameter. Here whitish and rough with peeling skin, it may also be grey or dark green.

The leaves are thickly succulent and covered in short white hairs. They are lanceolate in shape, variable in length and tapering to pointed tips. Mature leaves are shallowly channelled on their upper surfaces. The yellowish green leaf colour may turn dark seasonally. The leaves of Tylecodon plants generally dry and drop off in summer.

The flowers grow in a lax panicle on a long, erect stalk that emerges from the upper caudex next to the leaves. The flowers are green and pale yellow, appearing in summer.

The species distribution is in the Western and Eastern Cape, mainly in the Little Karoo around Ladismith to Vanwyksdorp. This photo was taken during March on the farm Minwater southwest of Oudtshoorn.

The habitat is succulent Karoo, where the plants grow on shaded south-facing slopes, sometimes in full sun. They are often seen on rocky outcrops in well-drained, sandy soil. This plant is rare, although its population is considered to be stable early in the twenty first century and therefore not threatened (Bond and Goldblatt, 1984; iSpot; www.redlist.sanbi.org).