Home » GENERA T-Z » Tylecodon » Tylecodon grandiflorus inflorescence
Back to Category Overview
Total images in all categories: 11,276
Total number of hits on all images: 5,987,971 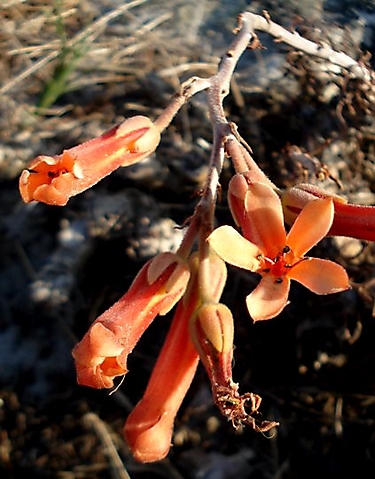 The Tylecodon grandiflorus inflorescence is borne on a long, angled stalk, well above the thick, succulent stems that also bear the leaves. A flower stalk emerges from a leaf axil near a stem-tip.

There are thin, dry bracts at the pedicel bases in picture and conspicuous scars where sterile bracts down the stalk have already dropped off.

The inflorescence branches only near the top of the stalk into a small cluster of long-pedicelled flowers. Flowering happens around the second half of summer.

The flowers are bird-pollinated, probably only long-beaked sunbirds and Cape sugarbirds are successful in dealing with the curved tubes (Smith, et al, 2017; Van Jaarsveld, et al, 2006; Manning and Goldblatt, 1996; iNaturalist).