Home » GENERA T-Z » Tylecodon » Tylecodon fragilis
Back to Category Overview
Total images in all categories: 11,276
Total number of hits on all images: 5,987,740 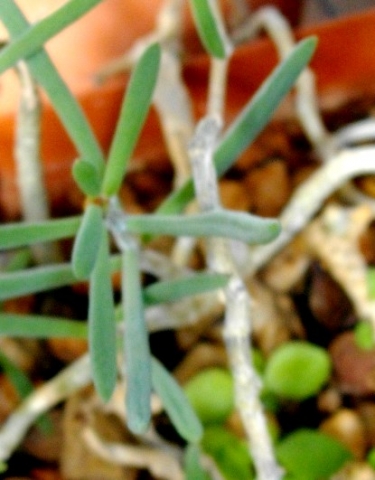 Tylecodon fragilis is a stem and leaf succulent that branches sparsely, becoming16 cm tall. The caudiciform stems may become 2,5 cm in diameter, their grey bark peeling.

The leaves are narrowly cylindrical to linear and succulent with rounded or pointed tips. Leaf colour is grey-green, sometimes with faint purplish spots or longitudinal, streaky blotches along their surfaces.

Small, yellow-green flowers are borne in thyrse-shaped inflorescences of 7 cm in length. The sepals are small and pointed, about 2 mm long, the corolla tube over 1 cm long, its lobes recurving.

The species distribution is confined to a small area near Strandfontein on the west coast of the Western Cape. The plant’s habitat is succulent Karoo where it grows on rocky outcrops or in the shade of coastal scrub. The species is considered to be endangered in its habitat early in the twenty first century, mainly due to coastal development and open-cast sand mining (Wikipedia; www.redlist.sanbi.org).