Home » GENERA P » Pteronia » Pteronia incana leaves
Back to Category Overview
Total images in all categories: 11,662
Total number of hits on all images: 6,774,664 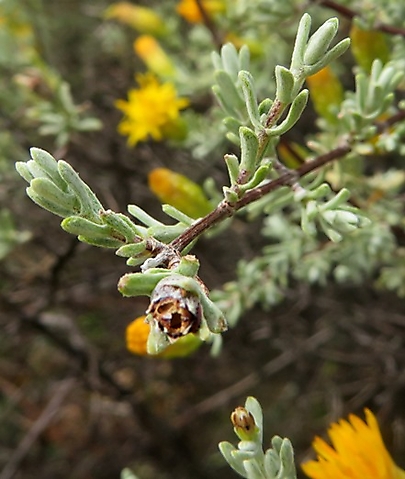 Pteronia incana leaves grow in decussate pairs, usually spaced on young branches. The leaf bases of the opposite pair come close to each other around the stem, about touching but not clearly joined. The next pair grows at a right angle to the previous (and consecutive) one, their arrangement known as decussate.

The narrow leaves curve in, some pairs in picture forming a U-shape, apart from right at their tips where the margins fold in, while some mature leaf-tips curve out slightly.

The internodes start off very short at a stem-tip, briskly lengthening to show some stem, bare but for the hairs on young sections (Vlok and Schutte-Vlok, 2015; Manning, 2007; Manning and Goldblatt, 1997; iNaturalist).