Home » GENERA P » Pteronia » Pteronia incana from orange to yellow
Back to Category Overview
Total images in all categories: 11,635
Total number of hits on all images: 6,753,128

Pteronia incana from orange to yellow 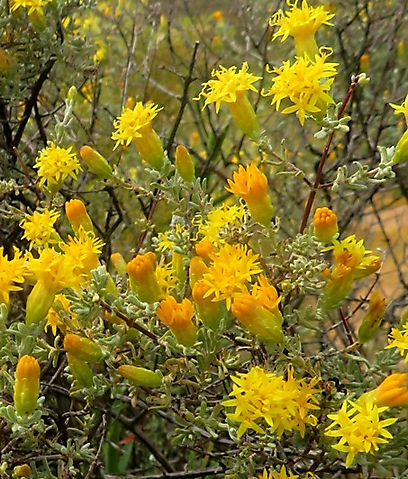 Pteronia incana buds turn orange at their tops when the involucres part bracts to expose some corolla surfaces. This is when they change the flowerhead shape from cone-shaped to cylindrical.

The tiny, rounded tips of individual florets, roughly ten of them neatly arranged in each young flowerhead (capitulum), are orange as are the partly opened corollas. Yellow colouring arrives once the five-pointed corollas spread fully and then overlap haphazardly from operating in a confined space.

Flowering happens above but close to the leaves, present on the stems right up to the flowerhead bases. Each flowerhead appears solitary at the tip of its own young branch (Vlok and Schutte-Vlok, 2015; Manning, 2007; Manning and Goldblatt, 1997; iNaturalist).