Home » GENERA P » Pteronia » Pteronia incana florets
Back to Category Overview
Total images in all categories: 11,635
Total number of hits on all images: 6,753,224 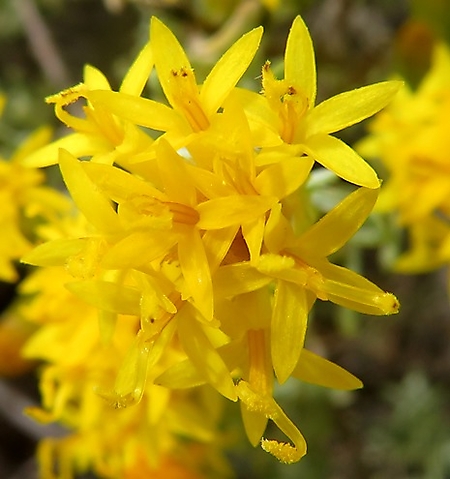 The five narrowly elliptic to almost oblong corolla lobes of a Pteronia incana floret spread widely. They are between bright yellow and lemon yellow. The petal bases form a narrow tube below, held in place by the trustworthy structures of receptacle and involucre.

Both the oblong anthers and the styles are exserted from the floret corollas. The filaments are fleshy and translucent, the granular anthers becoming dark with age.

The flowerhead comprises a disc of about ten of these bisexual florets. No ray florets occur in Pteronia (Vlok and Schutte-Vlok, 2015; Manning, 2007; Manning and Goldblatt, 1997; iNaturalist).