Home » GENERA P » Pteronia » Pteronia incana buds and open florets
Back to Category Overview
Total images in all categories: 11,635
Total number of hits on all images: 6,752,988 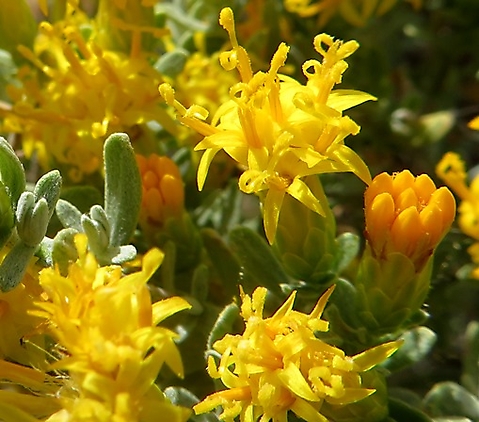 Open Pteronia incana flowerheads are paler yellow than the orange-yellow buds, neatly pointed before the five pointed corolla lobes of each floret spread and recurve. Eight to eleven disc florets per head were seen on the plant in picture, flowering in October.

Stamens and styles are exserted about as far as the corolla lobes are long, the florets bisexual. The flattened style branches take their time before separating in the newly opened florets. The stamens form a ring around them (Vlok and Schutte-Vlok, 2015; Leistner, (Ed.), 2000; iNaturalist).