Home » GENERA M-O » Othonna » Othonna lobata flowerhead
Back to Category Overview
Total images in all categories: 11,538
Total number of hits on all images: 6,618,387 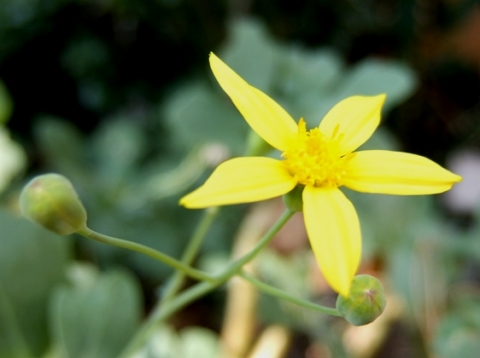 The yellow daisy-type flowerheads of Othonna lobata grow on thin, fleshy stalks that branch to carry a few in a lax cluster. Each flowerhead has (about) five elliptic ray florets with pointed tips and a cluster of tiny yellow disc florets in the centre. The ray florets are fertile, each producing a seed attached to a pappus crowned with bristles; the disc florets are male.

The involucre comprises only one row of bracts that are smooth and joined at the base. The receptacle has no scales. The picture shows the central flowerhead to have opened first, buds on the lateral stalks to follow. A flowerhead becomes about 1 cm in diameter.

Flowering usually happens late in winter and spring, while the photo was taken in autumn (April) of a plant under irrigation in Kirstenbosch (Vlok and Schutte-Vlok, 2010).