Home » GENERA M-O » Othonna » Othonna lobata stems
Back to Category Overview
Total images in all categories: 11,523
Total number of hits on all images: 6,605,241 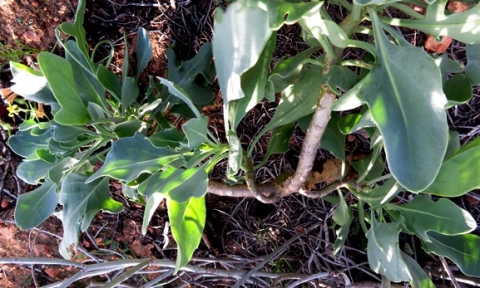 The long-stalked Othonna lobata leaves are clustered densely at the stem-tips. Stem elongation separates them somewhat lower down, not quite alternate but more scattered than spiralled. Yet lower down, leaf scars show where they had dropped off from stems that turn pale grey-brown with age from the initial green.

Curved stems may be caused by changes in moisture availability and temperature over the plant’s life. Some part of an O. lobata stem may be underground.

Midribs are strongly in evidence on the lower halves of both leaf surfaces, disappearing abruptly from sight in the upper halves (Smith, et al, 2017).