Home » GENERA M-O » Metalasia » Metalasia muricata
Back to Category Overview
Total images in all categories: 10,856
Total number of hits on all images: 5,516,178 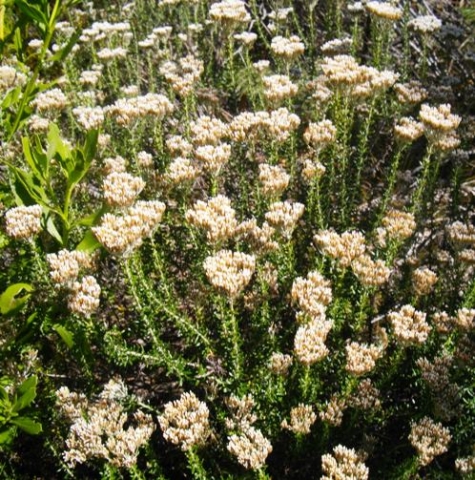 Metalasia muricata, in Afrikaans the witsteekbossie (little white stab bush), is a variable, much branched shrub with erect stems, typically growing to 2,5 m, sometimes to 4 m. The erect, densely leaved stems grow to similar heights, giving the shrub an even dome-shaped top.

The flowerheads are broad, nearly flat-topped with many clusters of about five discoid florets each, positioned densely together, but loose and free from each other. Each floret is surrounded by several rows of brownish bracts, thick-textured on the outside of the cluster. Flowering happens from late autumn to early spring.

The distribution of the species lies in a coastal strip from Saldanha to southern KwaZulu-Natal. The plant may form thickets on dunes and coastal land at elevations below 300 m. The species is not considered to be threatened in its habitat early in the twenty first century (Manning, 2007; Bean and Johns, 2005; http://redlist.sanbi.org).